Home
Magazine
Archipelago
What's on
About
Un-built
Imaginary
Email
Columns
A Grassroots Organization at COP: #1 Approaching A Global Climate Conference as a Grassroots Organisation
First column curated by ACAN (Architects Climate Action Network) on their approach to curation, exhibition design and involvement with COP26 and how that sits within the context of architecture and its relation to the climate crisis.

ACAN was formed by three architects on the occupied Waterloo Bridge, London, as part of the Extinction Rebellion protests in 2019 asking themselves what we can do as professionals in a climate emergency. ACAN focuses on empowering individuals to act collectively and grew into a network of hundreds of individuals and groups across ten countries. This was the basis to open a more complex discussion on the damage the built environment is doing to the planet and how it can and should be changed for the better.

The hype and expectations for COP26 in the run-up to the conference last year were immense, and we knew - as an organisation based in the COP26’s host nation, the UK - that we wanted to be present to represent the built environment when the world’s attention was on Glasgow.

However, as a voluntary organisation in planning our participation in COP26 we had to be realistic about what we could achieve given the costs of time, participation and finance. We decided on a collaborative series of exhibitions, events and activities that focused on open conversations, promoting the voices of those who could not attend and working closely as we could with the generous architectural scene of Scotland and Glasgow. 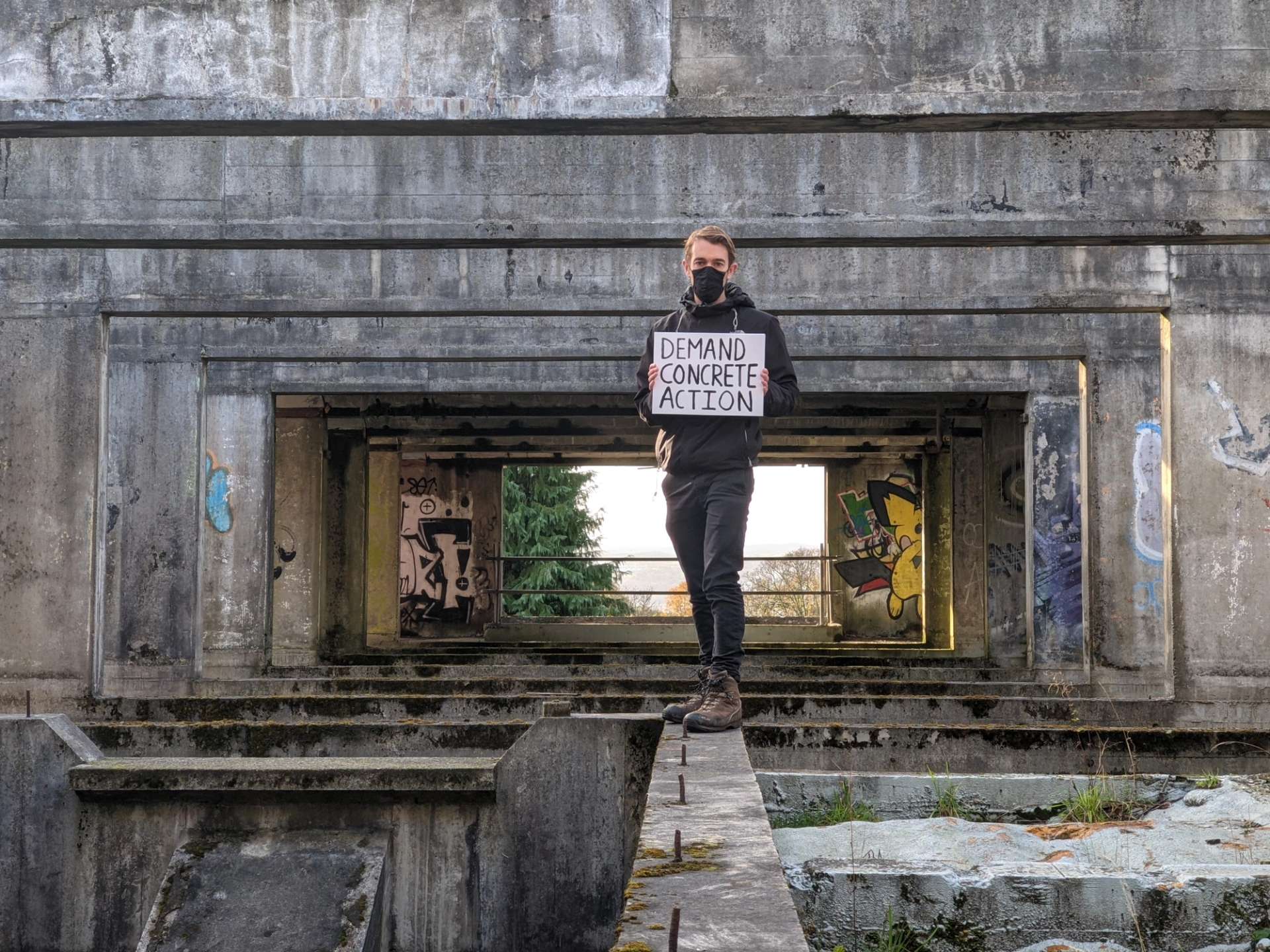 Thanks to Thierry Lye of New Glasgow Society we were given an exhibition venue which allowed us to promote the different strands of work at ACAN (such as our groups’ Education, Natural Materials, and biodiversity group “Where the Wild Things Aren’t”), our international ACAN chapters (ACAN’s Scotland, Sweden, Finland, Northern Ireland) as well collectives such as Re-Fabricate, France’s Climate Collage and Alternative Builders.

Local architects New Practice hosted workshops and panel discussions in their East Glasgow space Many Studios. The panels focused on subjects seldom tackled in official COP26 spaces like Embodied Carbon and Retrofit. Partnering with Scotland’s Architecture Fringe resulted in a comedy evening on the construction industry’s damage to the planet with Glasgow comedian Raymond Mearns. New Practice also delivered “The Landing Hub” during COP26, a community-driven event space where we were given a slot to speak about ACAN and our personal journey into climate action.

ACAN’s formation out of protest was dedicated to being present at major marches, with our architecture-focused banners among trade unions, climate groups and activists.

Given ACAN’s formation out of protest was dedicated to being present at major marches, with our architecture-focused banners among trade unions, climate groups and activists. Among the many activities carried out during COP26 there was an online banner drop we did with groups such as ACAN Scotland ACAN Portugal, Households Declare and outside iconic locations like Edinburgh Castle and the brutalist St. Peter’s Seminary. It was humbling to be in the city during the numerous impassioned speeches by world leaders like Mia Mottley, activists like Vanessa Nakate, or to have the privilege to see groups like Minga Indigna perform and protest. It was equally uplifting to see other professional groups like Doctors for XR march in solidarity in their workday scrubs.

Looking back, we succeeded in doing everything that we set out to do, but as a fringe event we were unable to raise public awareness on issues pertaining to the built environment in the press or media. Our approach paled in comparison with the recent work done by Just Stop Oil and Insulate Britain who laid down in public or risked their freedom to bring the climate crisis to the attention of the media. Nor did we help enough to relate our work with climate and racial justice and it is predominant damage to the global south. 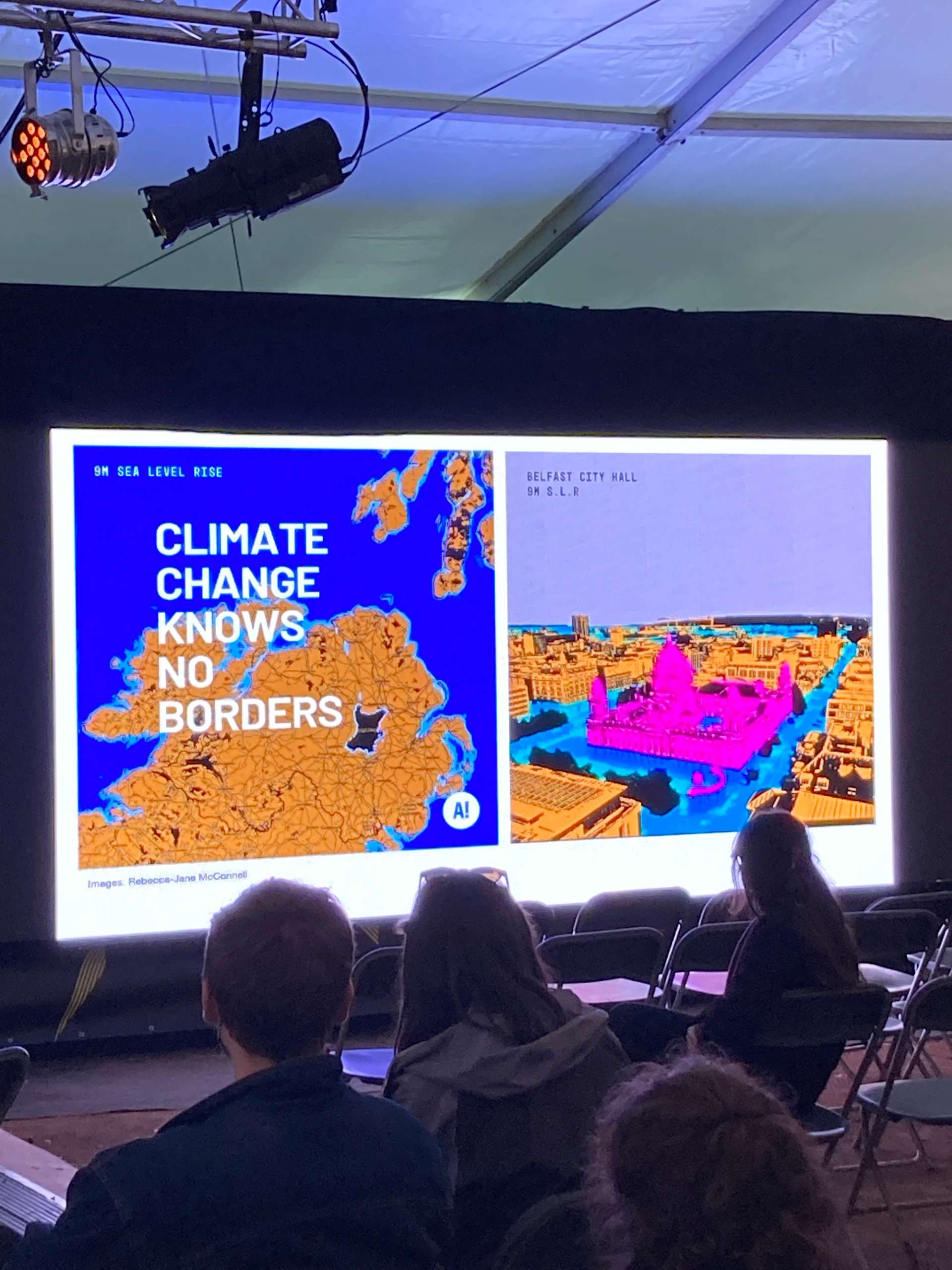 We did not and could not deliver eye-catching installations on the scale of UKGBC’s “Virtual Pavilion” or targeting industries like Darren Cullen’s “Hell Bus”. However, we were proud to deliver a programme of events and exhibitions that felt right to us as a grassroots organisation done solely through donations and a singular sponsor. Especially when, during COP26, commentators spotted how the city was filled with slick glossy mini-exhibitions and pop-up events that were smoke and mirrors for greenwashing.

Moreover, we also reused and learned from COP26 about exhibiting with little waste as possible and in a way that was open and engaging to as many people as possible. The posters we presented at COP26 have been reused in several exhibitions and events across the UK. During COP26, ACAN presented at UAL’s Carnival of Crisis in London – with a Climate Confession Booth installation – provoking a heated debate. The installation was built out of a U-Build’s modular structure that we packed away to be reused elsewhere. At Futurebuild 2022 conference in London we hosted once again a lively and action-oriented series of workshops and events on the subject of waste and reuse. 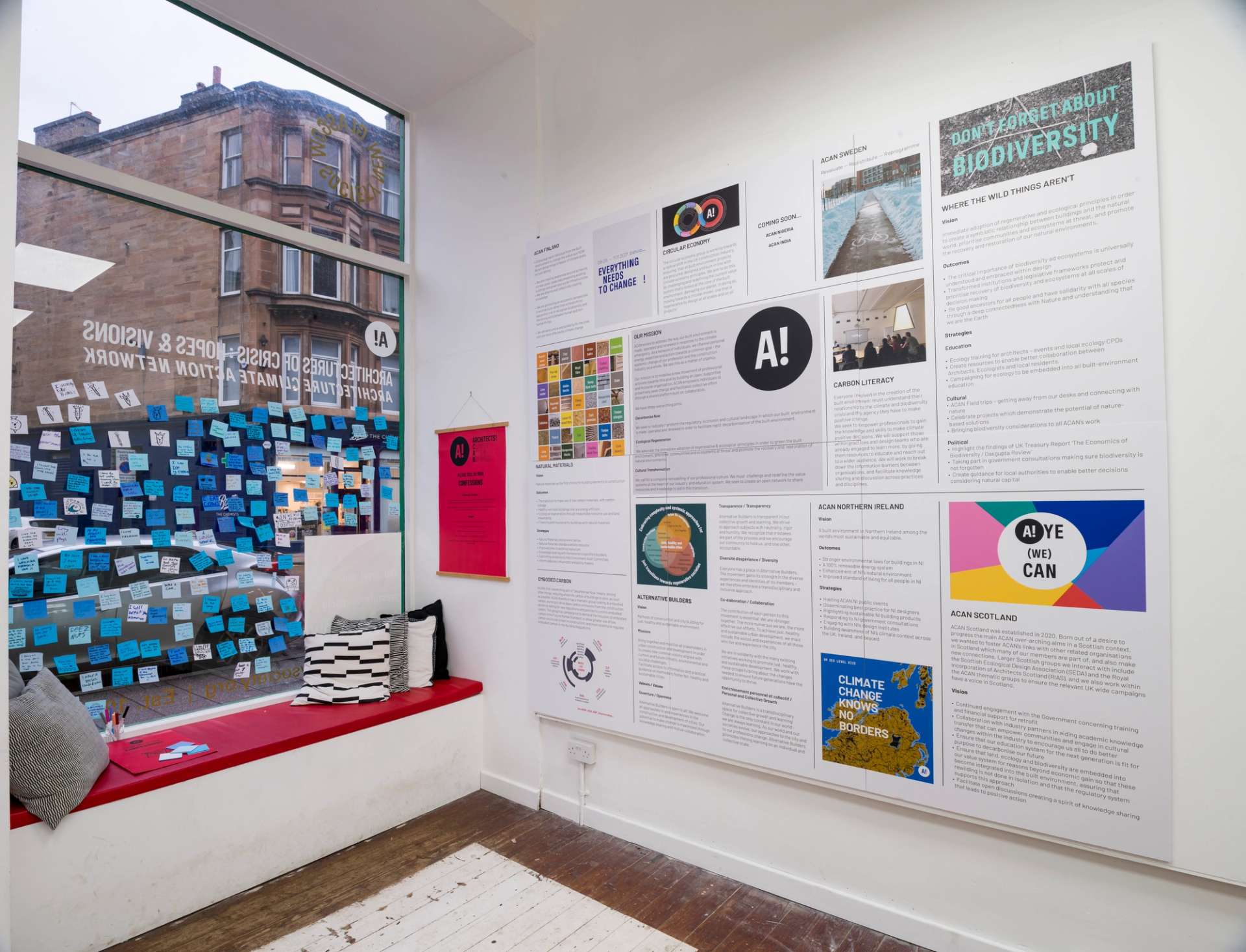 Apart from COP26 there is a growing number of events and exhibitions that are interrogating their approach to waste and reuse: Wastebuild Zero is a conference thematically and holistically driven by circular economic principles and Laboratory of the Future: ECO? in Prague earlier this year did not just exhibit sustainable design, but was openly critical of the providence of products shown and whether they were environmentally conscious.

“Le Marché International des Professionnels de L’immobilier” better known as MIPIM in Cannes produced a report that laid out its sustainable goals like the World Architecture Festival and its Sustainability Mission Statement. These are undoubtedly positive steps, but the language used in these reports often suggests a mere encouragement rather than mandatory and much-needed action. A weak and conciliatory language is itself plaguing COP26 outcomes.

The language used in [...] reports often suggests a mere encouragement rather than mandatory and much-needed action. A weak and conciliatory language is itself plaguing COP26 outcomes.

In COP26 we started our own conversation on what change we wanted to see and aligning that approach with our own values was something we achieved and is being seen elsewhere Our ACAN Norway chapter recently showcased “Dreams Need Action!”, exhibited during the Oslo Architecture Triennale to similar values. Organiser Armelle Breuil commented, “the Triennale's main programme felt like business as usual, and we wanted to emphasise the climate emergency and how we need to act now.”This spirit of creating your own narrative and working collaboratively and locally is essential for the radical change we are seeking in our built environment, either at COP27, future conferences, exhibitions and events.

Bobby Jewell is a freelance press and communications consultant in architecture and the built environment profession. Based in Glasgow, Scotland, he joined Architects Climate Action Network in 2020 and is on the Steering Group as Communications Coordinator. He is a sound artist, at COP26 he recorded “Climate Protest Ambient” for Clyde Built Radio and produced the radio programme “Indigenous Voices, Protest & Performance” at COP26 for Resonance FM. 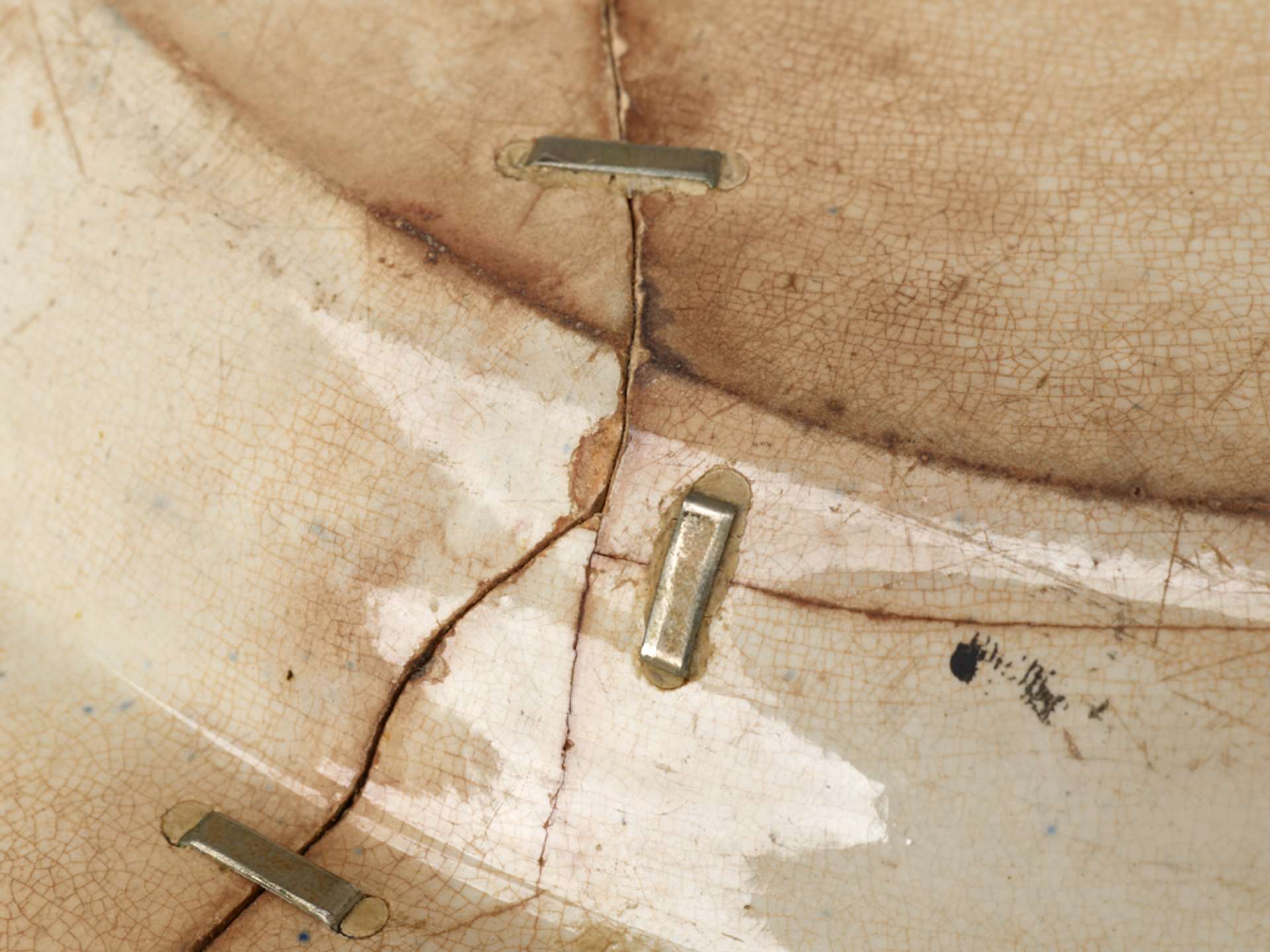 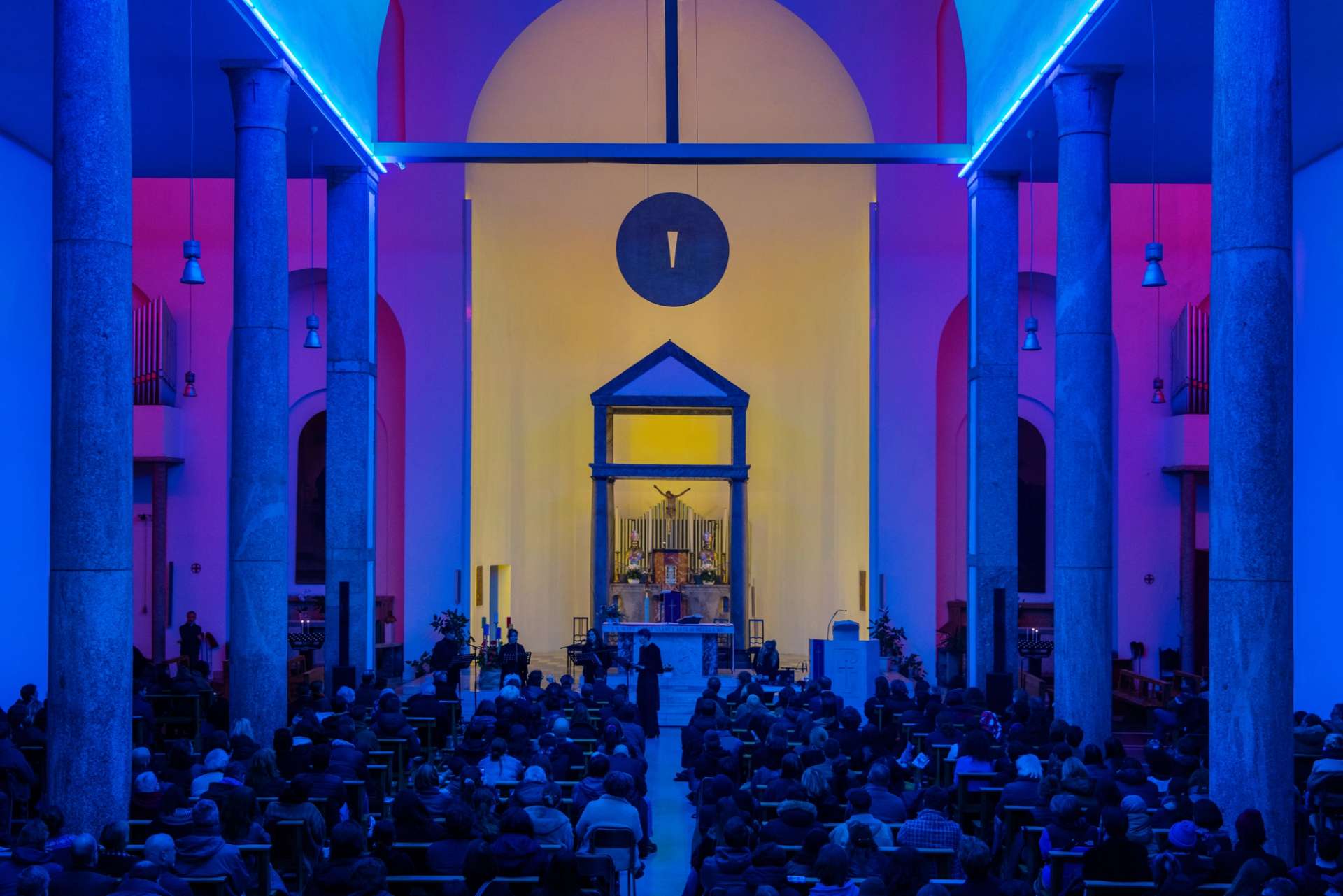 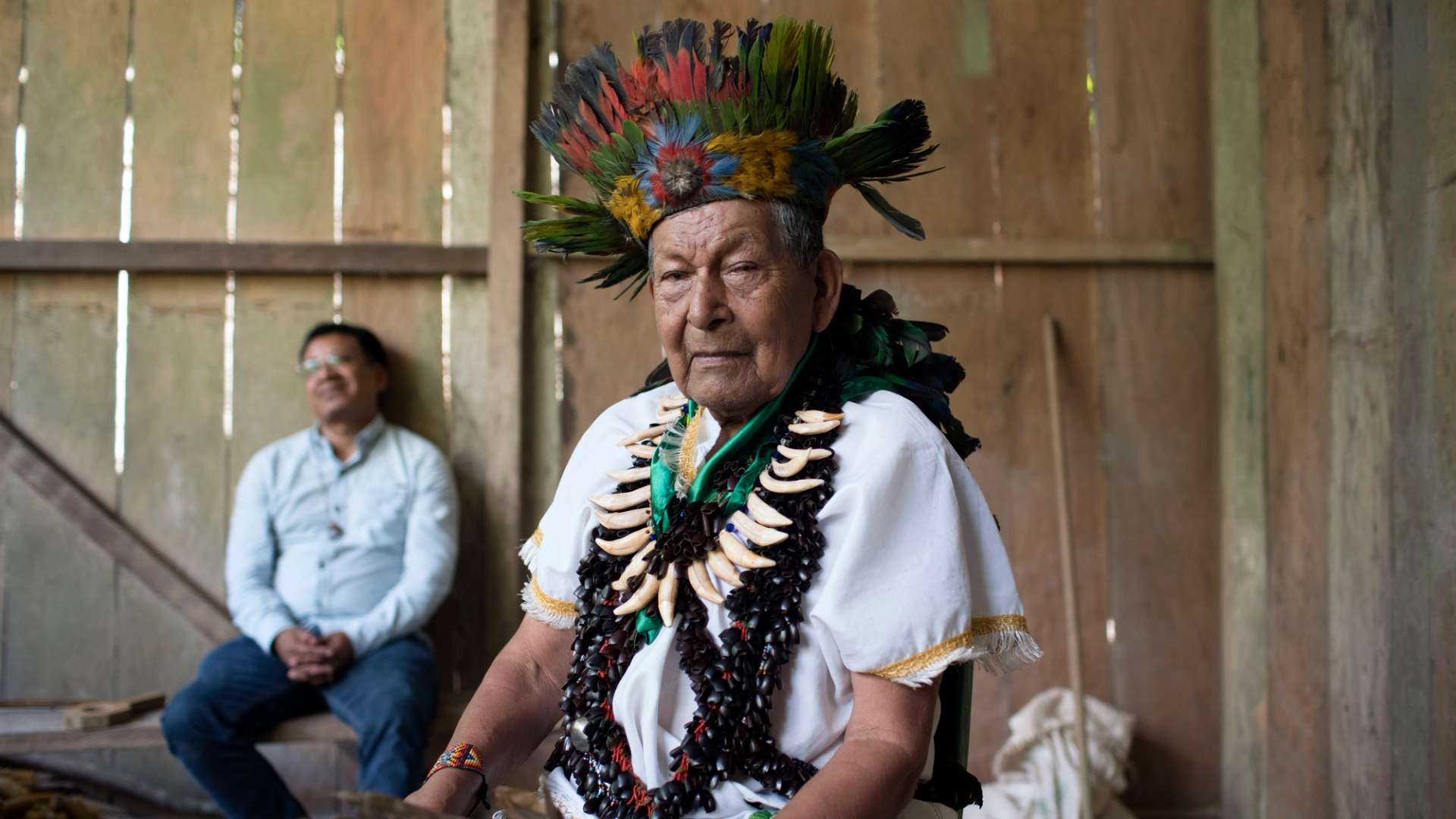 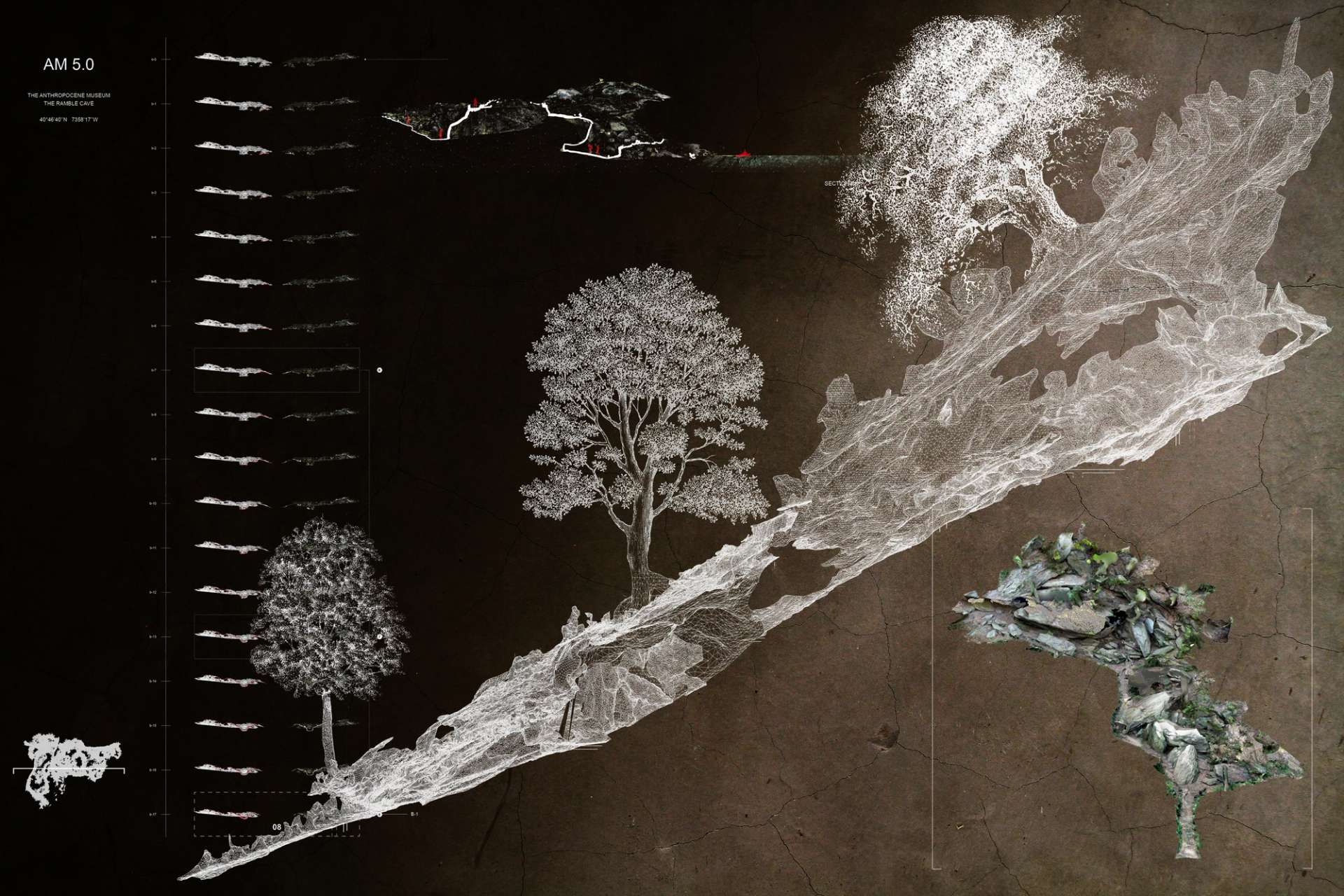